The Calperum OzFlux Site is on the former Calperum Pastoral Station, near Renmark in the South Australian Riverland. It is now a reserve, managed under contract to the Commonwealth Director of National Parks, by the Australian Landscape Trust. The Australian Landscape Trust (ALT), is a non-profit, philanthropic organisation, dedicated to supporting improved management of Australia’s natural resources for the benefit of regional communities and the broader environment.

Calperum Station lies in a semi-arid environment, fringing the River Murray floodplains. The OzFlux tower is set in undulating country, consisting of low sandy dunes and heavier swales, predominantly covered with mallee-form woodland. It was grazed until 1994, and can now be considered as being in a post-grazing recovery phase. The western part of the Station includes portion of the Riverland (River Murray) Ramsar wetlands.

The dunes are made of old wind-blown calcareous soil. The mallee eucalypts and grasses that dominate the environment are superbly adapted to the climate, conserving water when it is scarce and exploding with life, especially in spring, following any substantial rainfall.

The mallee ecosystem in which the Calperum Flux Tower is sited is comparable to large areas of southern Australian, as shown in the following map (Australian National Botanic Gardens). 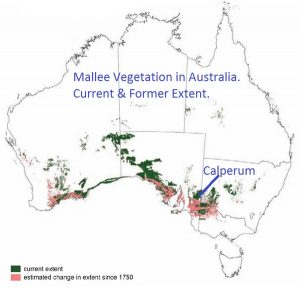 The occurrence of mallee vegetation is closely associated with calcareous soils. The surface layers are often sandy and free of carbonate, but there will be a strongly calcareous layer somewhere in the soil profile. At the Calperum OzFlux site the upper sandy layer is about 70 cm deep (with many roots in the top 20 cm), grading to lighter, calcareous, fine sandy clay with limestone nodules, which continues beyond 2.5 metres depth.

In geological terms, the modern landscape (the sandy Woorinen Formation and calcareous Bakara Soil) overlies Blanchetown Clay, which in turn overlies coarse Pliocene Sands. Regional groundwater is at depth, generally associated with the Loxton/Parilla (Pliocene) Sands. At the OzFlux site that aquifer is at least 35 metres below the land surface.

An array of monitoring equipment is located at various heights on a 20m tower.

Technical Summary – details of all equipment