Rainfall is a driving force in the mallee ecosystem at Calperum. Along with temperature, it influences respiration, CO2 levels and net productivity (the amount of vegetative dry matter produced).

Soil respiration, resulting in a loss of carbon from the ecosystem back into the atmosphere, is very sensitive to rainfall. 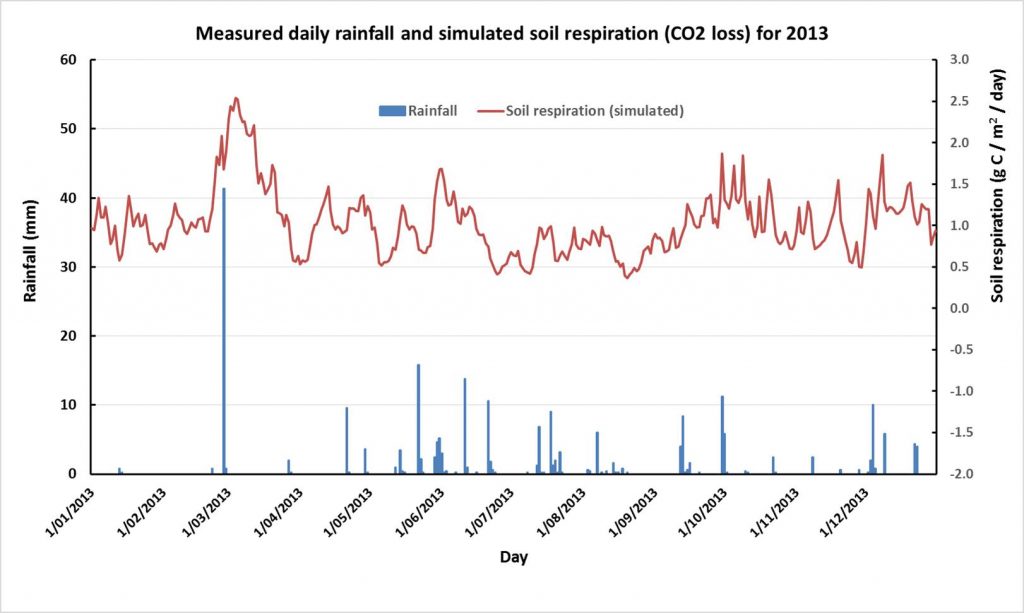 Exudate from roots encourages the growth of microbes in the soil immediately surrounding the root (the “rhizosphere”).  In turn, the healthy microbial activity makes the tiny amounts of essential nutrients, which are usually bound on soil particles, more available to be absorbed by the roots. In essence, the plant is “feeding” the microbes to help produce an environment around the root that supplies the essential nutrients the plant needs. These respiration processes produce CO2.

Net Ecosystem Productivity (NEP) is calculated from the measured half hourly exchanges of CO2, from which the difference between the daily uptake of CO2 by the green vegetation and the production of CO2 by respiration is estimated. NEP is positive if the ecosystem is gaining (sequestering) carbon. During the two year period (August 2010 – August 2012) sequestration was occurring most of the time.

It is clear that the vegetation, particularly the evergreen Mallee trees, is very well attuned to the availability of water. The Mallee has evolved to grow and survive in this environment of limited and variable rainfall.

The period from August 2010 to December 2016 has been a period of average to above average rainfall. A bushfire in January 2014 resulted in a net loss of carbon, followed by a slow recovery as the plants (mainly mallee trees) grew new shoots. See Fire for more information. 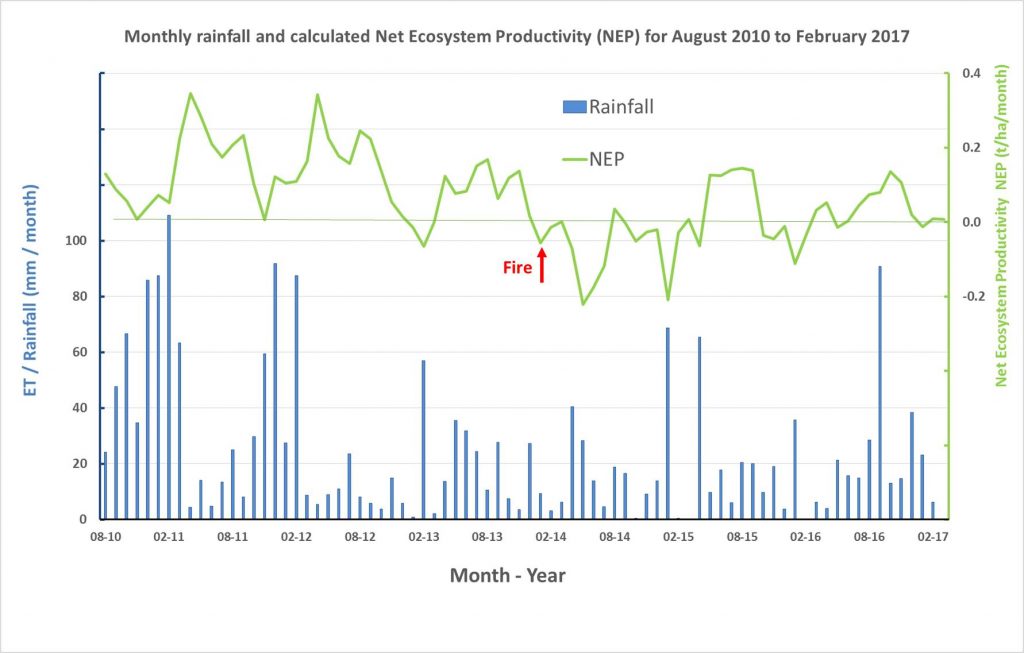 Net ecosystem productivity is highly dependent on rainfall. The vegetation grows and accumulates (sequesters) carbon after rainfall - but when there is limited rainfall, e.g. April 2012 to February 2013, NEP declines to such an extent that the vegetation system is actually losing carbon. 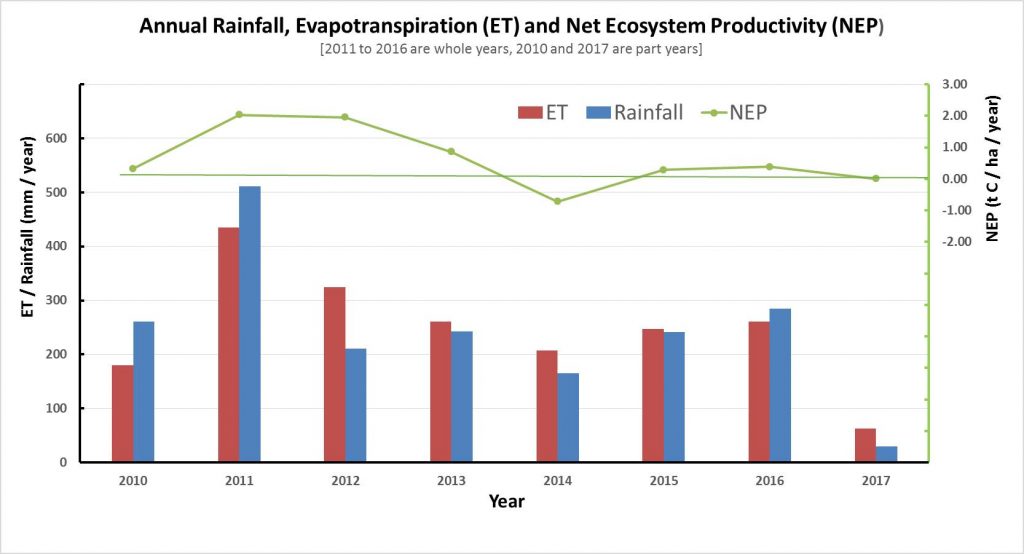 There is a very clear relationship between rainfall and carbon accumulation of the ecosystem.

There is a close relationship between the amount (or area) of green leaves and the net productivity of the ecosystem, shown in the Figure below.

As shown in the Net Ecosystem Productivity graphs above, after a bushfire in January 2014 there was no net ‘growth’ for some time. In fact the ecosystem continued to lose carbon until May 2015 – a lag of16 months after the fire. By this time the Mallee trees had regrown from the lignotubers (the Mallee roots), but not the unburnt trunks (see below). Some grasses and shrubs had also grown.

The frequency of fire at Calperum seems to be in the range of once every 20 to 30 years. In the period between fires there is opportunity for the ecosystem to accumulate dry matter and carbon, with the trunks and lignotuber of the mallee trees being the major store of carbon. In those intervals between fires several extended dry periods would be expected to occur, resulting in very small, or negative, amounts of carbon accumulation.

Our measurements indicate that the rate of carbon accumulation varies considerably between years, with rates from -1 t C/ha/yr in dry years to 2t C/ha/yr in the occasional wet years.

Measurements of above ground dry matter indicate that the mallee trees had 9.3 t/ha at the time of the fire in January 2014 - which had accumulated over a period of nearly 30 years. That implies a longer term rate of carbon accumulation of about 0.3 t C/ha/yr.

The standing biomass was measured before and after the fire, and is shown in the following table; ‘Calperum DM’.

The relatively infrequent fires at Calperum contrasts with the near annual fires in the savanna areas of northern Australia.